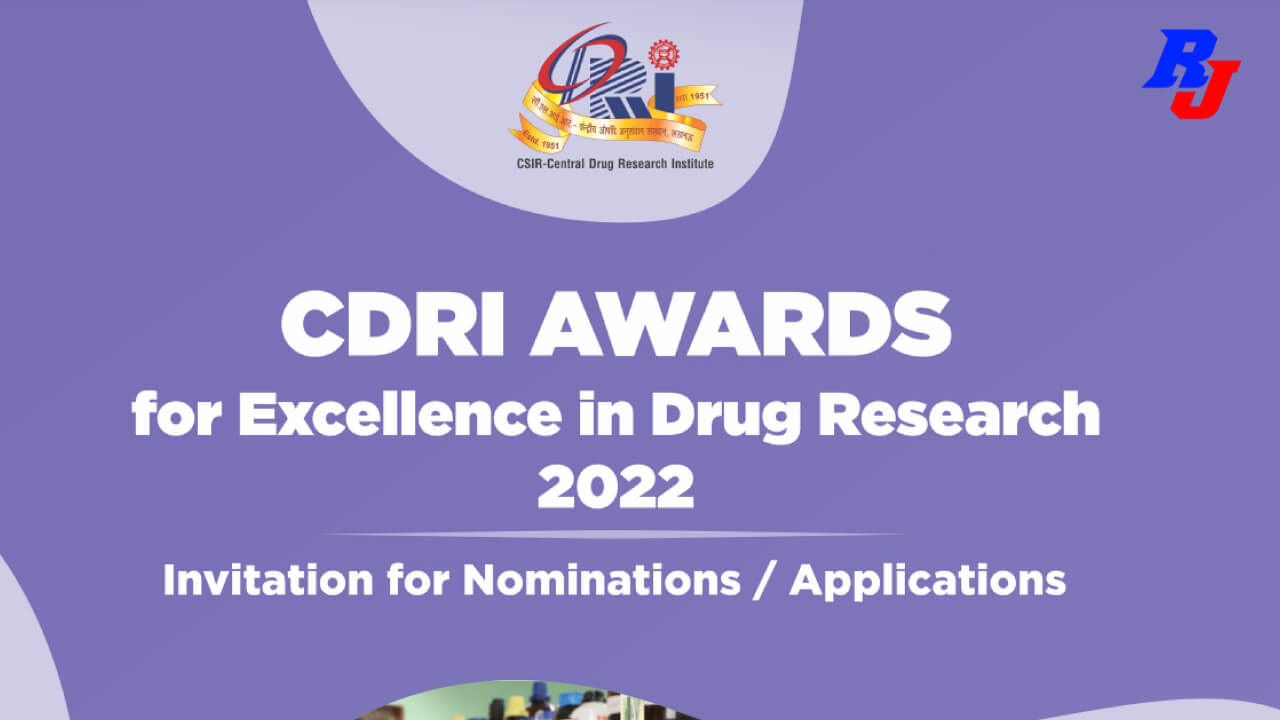 About- The CSIR-Central Drug Research Institute (CDRI), Lucknow, was seventh in the chain of CSIR labs that were established in India right after independence India with an aim for technological independence of the Nation. CSIR-CDRI was broadly mandated with the task to revolutionize the pharmaceutical sector, which was almost non-existent at that time for accessibility and affordability of drugs. Today, CSIR-CDRI has evolved into a unique institution possessing end-to-end expertise in the domain of new drug development –its human resource and infrastructure today is second to none. Besides being the breeding ground of huge highly trained human resource for the drug development and manufacturing, out of 20 new drugs discovered, developed and approved in the post-independent India, 11 (8 synthetic + 3 phytopharmaceuticals) are contributions of CSIR-CDRI, Lucknow. CDRI AWARDS for Excellence in Drug Research

 Scientists/researchers who are engaged in basic and applied research in the area have direct bearing on drug research and development and have made outstanding contributions with potential for application/product and technology development.
 Age should be below 45 years, as reckoned on 17 February of the year of award.
 Must be a citizen of India
 The research work for which nomination/application is made must have been carried out in India.

With an aim to promote drug discovery and development research in India, CSIR – Central Drug Research Institute, Lucknow has instituted CDRI Awards in the year 2004 to recognize scientific excellence in the country in the area of Drug Research and Development.

Purpose: Promoting excellence and recognising outstanding contributions to the Drug Research made by the scientists for their work done in India.

 These awards are given annually to the Indian Nationals below 45 years of age who have carried out outstanding research work in the area having direct bearing on Drug Research and Development.
 There are two separate individual awards each for the area of Chemical Sciences and Life Sciences.
 Each award carries a Cash prize of Rs. 25,000/- and a Citation.
 The awardees are expected to deliver an Award Oration on the cited work on the day of Award Felicitation Ceremony, usually held as a part of CSIR Foundation Day Celebrations at CSIRCDRI.
 TA/DA of the awardees forto-and-fro journey will be borne by CSIR-CDRI as per the prevailing rules of Travelling allowance of Government of India.

Nomination/application for CDRI Awards for the year 2021

 Head of the Institutions / Organizations / Universities / Industries, Bhatnagar Awardees, Fellows of National Science Academies can nominate the most deserving scientists/researchers who are engaged in basic and applied research in the area having direct
bearing on drug research and development and have made outstanding contributions with potential for application/product and technology development.
 Eligible Candidates can also directly submit the application.
 Word file of proforma for Nomination/application can be downloaded from https://www.cdri.res.in/
 Information regarding Nomination/application should be sent as per the prescribed proforma (a softcopy in PDF format and a Hard copy).
 Complete information as per the enclosed proforma along with requisite enclosures must reach the address given in the proforma by 31 December 2020 for consideration.

Join Our Discussion Forum – Keep your view, share knowledge/opportunity and ask your questions

Empowerment and Equity Opportunities for Excellence in Science by SERB, India

Add Researchersjob to your Homescreen!