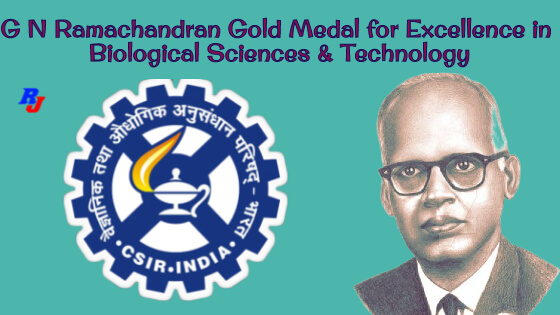 b) The Award shall be bestowed on a person, who in the opinion of Advisory Committee constituted by CSIR, has made conspicuously important and excellent contributions to human knowledge and progress, fundamental or applied in the particular field of endeavor, which is his / her specialization.

c) The award would be given on the basis of contributions made through work done primarily in India during the ten years, preceding the year of prize (For this purpose “primarily” will mean “for the most part”).

NATURE OF AWARD– A Gold Medal and a citation are to be presented to the recipient on 26 September, the CSIR Foundation Day. Medal is awarded for notable and outstanding research, applied or fundamental, in the inter-disciplinary subject / field of Biological Sciences and Technology.

The Award shall be given every year with the approval of the Governing Body of CSIR on the recommendations of the Advisory Committee.

a) The Advisory Committee for each year’s award would be constituted by DG, CSIR. The Committee would consist of a maximum of seven experts in broad areas.

b) On receipt of the nominations for a particular year, CSIR would circulate the list of nominees along with the detailed statement of work and attainments of each candidate to all members of Advisory Committee.

d) The composition of Advisory Committee, the information submitted for their scrutiny, the proceedings of the meeting and the procedure for consideration of the nominations, other than as detailed herein would be kept confidential.

a) Name of candidates may be proposed by a member of the Governing Body (CSIR); Presidents of approved scientific societies and academies of all-India character, Vice-Chancellors of Universities; Deemed Universities and Institutions of national importance; Directors of Indian Institute of Technology (IIT), Director-General of the major R & D organizations, such as the Defence Research & Development Organisation, Indian Council of Agricultural Research, Indian Council of Medical Research, Directors of CSIR Laboratories, Bhabha Atomic Research Centre, Tata Institute of Fundamental Research, Secretaries of the Department of Scientific & Industrial Research, Department of Biotechnology, etc. Member in-charge (Science) in the Planning Commission and former Prof GNR Gold Medal Awardees. University Faculties can recommend scientists working in their institutions only and route nominations through their respective Vice-Chancellors, while the faculties in IITs are required to send their nominations through their Directors. Directors-General of the R & D Organisations and Chairperson of Commissions may sponsor names of the scientists working in their respective organizations. The Directors of CSIR laboratories can nominate candidates in disciplines of their interest irrespective of the fact whether they are working in CSIR laboratories or outside. The recipients of Prof GNR Gold Medal can send nomination of one person only for each year’s award. Nominations from other individuals sponsoring their own names or of other are not acceptable. Each nomination should be accompanied by a detailed statements of work and attainments of the nominee and a critical assessment report (not more than 500 words) bringing out the importance of significant research and development contributions of the nominee made during the ten years preceding the year of the Prize.

b) A candidate, once nominated, would be considered for a total period of three years, if otherwise eligible. Once such a nomination has been received, CSIR can correspond directly with the candidate for supplementary information, if necessary.

The nomination should be submitted in the prescribed format by sending/sharing all relevant papers to ssb@csirhrdg.res.in on or before May 31, 2022. “GNR 2022 Nomination” should be written in the subject line of the email. It is not necessary to send a hard copy.

a) The Award will be presented to the recipient on 26 September, the CSIR Foundation Day.

You can get our Regular updates on Telegram also

Join us on Telegram

How to write a literature review: Tips, Format, and Significance

Research Proposal How to Write: Detail Guide and Template

DBT Call for Proposals for Energy Biosciences & Waste to Value

Add Researchersjob to your Homescreen!

Research and Scientist Positions at CDFD-Research institute in Hyderabad, India